Boxing took a back seat for much of the year for the fans. With no fight schedule and the return was unknown there was nothing to get excited about.

However, boxing is a profession and the gym doesn’t furlough the fighters. Trainers across the globe had to ensure their charges were sticking to their regimes, getting in the roadwork and eating right in case that phone rang.

Here we take a look at five of the best trainers who excelled in 2020.

Starting in fifth place, a man that went quietly under the radar in 2020 was Sean O’Hagan. Usually, he can be seen in the corner of Josh Warrington as his father as well as trainer, but this year saw no contests for the IBF Featherweight king.

Instead, O’Hagan turned his efforts to breathing new life into Maxi Hughes, and he supervised a pair of superb wins for the Rossington Lightweight.

Firstly, Hughes was a heavy underdog for the return of Jono Carroll in August, but he turned in a magnificent performance to upset the Irishman, taking a deserved points win.

Two months later, he took another away corner assignment, this time in Dubai against unbeaten Kazakh, Viktor Kotochigov, but again he upset the odds, taking another deserved points win and winning the WBC International title.

Ross is a man with a big reputation in the female game. The American coach has overseen Katie Taylor’s rise to become pound-for-pound number one, and 2020 saw two excellent performances from the Irishwoman.

Taylor first went into battle with Delfine Persoon, who had given her nightmares in June 2019. Taylor was much more composed this time, and had a little too much for the Belgian in another classic.

The Olympic Gold medallist then rounded off the year topping a mainly female card at Wembley Arena, routing Miriam Gutierrez on the cards.

The man that masterminded one of the greatest upsets in the female side of the game rightly features here.

Rick Ramos was not only pitting his wits against a Hall of Fame trainer in Abel Sanchez in August 2020, but he was also leading his boxer and client, Jessica McCaskill, into battle against a certain Hall of Fame fighter in Undisputed Welterweight world champion, Cecilia Braekhus.

In a performance where she carried out a prepared game plan perfectly, McCaskill became new champion in a deserved majority decision victory, and Ramos had been the brains behind it.

A rematch is much anticipated for 2021, but big things are on the horizon for McCaskill and Ramos regardless.

A product of the world famous Kronk gym under the principles of the legendary Emanuel Steward, one of his pupils, his nephew, Javan ‘Sugar’ Hill, truly stepped out of his mentor’s shadow in 2020.

He had previously been working with the likes of Adonis Stevenson, Anthony Dirrell and Charles Martin, and at the back end of 2019, he was in conversation with Tyson Fury about becoming part of his team for the upcoming rematch with Deontay Wilder.

In the end, Hill became Fury’s head trainer to the surprise of most, especially after Ben Davidson had got Tyson in tremendous shape to draw the original meeting with Wilder.

The move was a masterstroke though, as Hill oversaw a stunning seventh round stoppage win for his fighter.

Steward had met Fury in 2010, and realised the Manchester man’s potential even back then.

On winning the Wilder rematch, Hill would pay tribute to his uncle saying, “Emanuel Steward is smiling down from heaven, he knew Tyson would be a champion even back then.”

Our trainer of the year, Teofimo Lopez Sr. The man who honed his son’s boxing skills from the age of six saw his boy pick up multiple pieces of Lightweight treasure in October’s stunning win against Vasyl Lomachenko.

Prior to that win, Lopez senior had overseen his charge wipe out Richard Comney to win the IBF belt in December 2019, and, with his huge victory over the Ukrainian, Lopez becomes one of the hottest pound-for-pound properties in the sport.

2021 should see some massive matches made for Lopez, and first could come a money spinning assignment in Australia against IBF mandatory, George Kambosos Jr, but there could also be a move to Super Lightweight to further cement Lopez’s legacy.

Brook: I’m confident I would knock Khan out 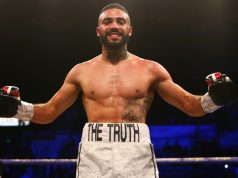 Tomlinson: I’m a massive risk to the top ten in Britain