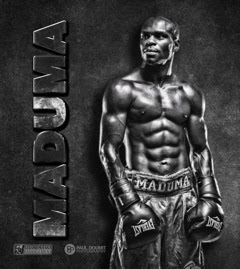 The 29-year-old Maduma, world rated by the World Boxing Council (WBC) at No. 3 and No. 4 by the IBF, broke his successful Montreal training camp last Friday and headed to Great Britain to fight IBF No. 5-ranked Mitchell for the right to become the mandatory challenger for IBF lightweight champion Miguel Vazquez.

The largest crowd Maduma has fought in front of has been 8,000 at Bell Centre (Montreal) earlier in his professional career. He’s ready to play the underdog role in front of up to 80,000 fans at Wembley Arena supporting his British opponent.

“We had a very, very good training camp to prepare for this big fight.

“I’m excited to be fighting in this big event.

“A lot of things will be different over there for me but I’m fully focused on doing my job.

“I’m bringing my ‘A’ game to prove I’m one of the best lightweights in the world.

“I give all my respect to Mitchell. Everybody there will be thinking he’s going to win, but I’ll be motivated to win as the underdog.”

Maduma’s promoter, Camille Estephan (Eye of the Tiger Management), will catch up with his lightweight star in the making this Wednesday in London. Estephan is on a roll as manager of newly crowned World Boxing Council heavyweight champion Bermane Stiverne and David Lemieux, who destroyed Fernando Guerrero last Saturday night for the vacant North American Boxing Federation middleweight title.

“Ghislain Maduma is truly, right now in my belief, the most underrated fighter in the sport simply because people don’t know him outside of Canada,” Estephan commented. “He’s been in the shadows but on May 31st he will grab this opportunity with all the attention at Wembley Stadium. Based on his skills and character, along with the fantastic camp he had, we are very confident that Ghislain will prevail in his fight against Mitchell.

“Many Quebec fighters may have failed in the UK; the likes of (Lucian) Bute and (Jean) Pascal have tried but were not successful. I believe Ghislain will bring a win back home against Mitchell. Ghislain has blazing speed and power. He was not built through fighting weak competition, always facing competition that assured us a progression that tested him from one fight to the next, and he’s consistently responded by getting better and better. Ghislain is ultimately conditioned through the training that he has done. No other athlete in Canada, in any sport, can rival what he’s done with his conditioning. Kevin Mitchell better be ready because this will not be a walk in park! We’re going into this fight with the intention of making a major statement.”