ESPN’s Friday Night Fights will once again return to The Event Center at Turning Stone. This time, the headliner will feature Brian Vera (22-6-0, 13KO) versus Donatas Bondorovas (17-3-1, 6KO). The two will fight for the NABO Middleweight Championship. The co-feature bout will be between Jackson Junior Dos Santos (14-0-0,12KO) and Umberto Savigne (10-1-0,7KO). Dos Santos and Savigne will fight for the WBO Latino Light Heavyweight Championship. 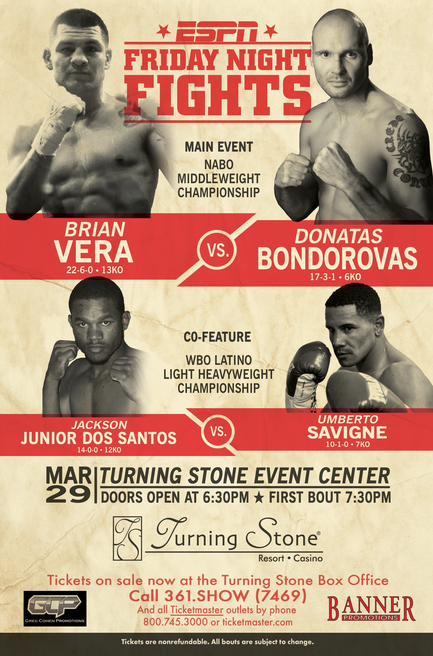 It’s not the first time this popular boxing event has been held at the Turning Stone Resort and Casino, and for good reason. Boxing fans have many options before and after the event to eat, gamble, relax, stay over night or hit the dance floor. With over 21 distinct dining venues, 5 award winning hotel accommodations and around the clock gaming excitement including access to The Poker Room, there is something for every boxing fan!

It’s also not Vera’s first turn on Friday Night Fights this year. He’s making a quick return after his big upset win over Sergiy Dzinziruk, and his new-found status as one of the top 10 middleweights in the world according to ProBoxing-Fans.com. Will another win here put himself in the running to be the opponent for Julio Cesar Chavez Jr’s return bout?