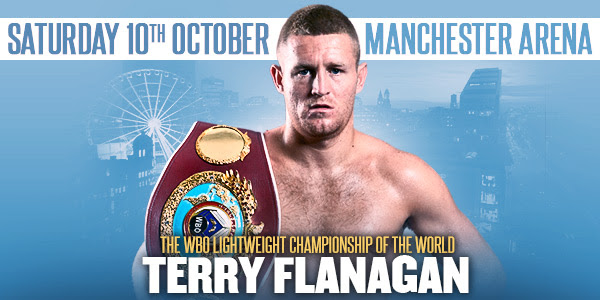 On Saturday, October 10th, Terry Flanagan meets Diego Magdaleno in a WBO lightweight title fight from Manchester, England, with the card shown in the UK on BoxNation. Right here, you have the official promo video for the Flanagan vs. Magdaleno card.

Flanagan is making the first defense of the lightweight strap he picked up in a vacant title fight, and he’s doing so in his hometown. So it’s going to be a huge homecoming for him, and Magdaleno will find he’s up against more than just his opponent on fight night. Also on the World War 3 card is another title fight. Here, Liam Smith takes on John Thompson for the vacant WBO junior middleweight title.

The card was also supposed to include Andy Lee vs. Billy Joe Saunders at one point, but that fight has of course been pushed back now on several occasions. Stay tuned for the next week for more updates on Flanagan vs. Magdaleno and Smith vs. Thompson, and enjoy watching the quick little promo video for the bouts.