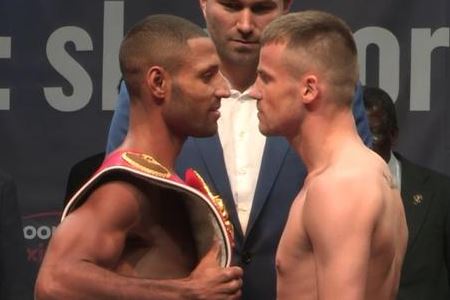 This afternoon, the weigh-in was held the Indigo at The O2, for the huge bill which is headlined by Sheffield’s Kell Brook defending his IBF Welterweight title against Birmingham’s Frankie Gavin, Londoner Kevin Mitchell challenging Jorge Linares for the WBC Lightweight belt and Welshman Lee Selby attempting to take the IBF Featherweight crown from Evgeny Gradovich.

Find the full Brook vs. Gavin weigh-in results and weights for all of the notable fights on the loaded card here.

*Linares was overweight on his first attempt and had an hour to lose the extra weight.

Before the weigh-in, the Indigo at The O2 opened its doors at midday allowing fans to mingle with stars including newly crowned James DeGale, Carl Froch, Darren Barker and Paulie Malignaggi.