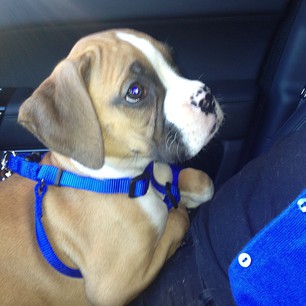 The honors keep on coming in for the legendary Bernard Hopkins. First, he breaks his own record as the oldest boxing champion of all-time by handily defeating Tavoris Cloud via Unanimous Decision. It was a win which helped him score revenge on an old rival, Don King, and further establish his legacy as one of the best old fighters in boxing’s history.

Now, there’s even more good news. He’s going down in the Kardashian hall of fame, as Khloe Kardashian, and husband Lamar Odom, have decided to name their new boxer puppy Bernard Hopkins.

The news came via Khloe Kardashian’s Twitter account (@khloekardashian), that she and her husband Lamar Odom welcomed a new addition to the family by adopting a baby boxer puppy.

On Tuesday, Khloe tweeted out the exciting news, and shared that they decided to name the puppy “Bernard Hopkins” in honor of the champ who recently became the oldest athlete in American sports to win a major championship.

According to Khloe’s younger sister, Kendall Jenner, the newest addition to the family, will simply be called “B” by the family.

Let’s hope they keep puppy Bernard Hopkins on a tight leash, so he doesn’t get in too much trouble, a la his namesake in his younger days. Ha ha ha.