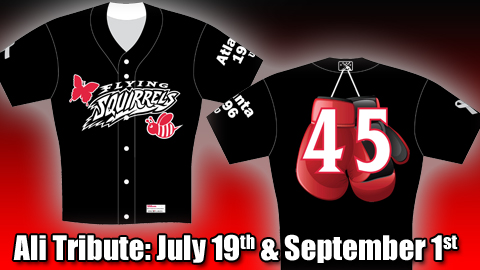 The Richmond Flying Squirrels, Double-A affiliate of the San Francisco Giants, are proud to announce they will be honoring the life of the late Muhammad Ali at The Diamond starting on July 19th, marking the 20th Anniversary of Ali lighting the Olympic Torch. The Squirrels will be wearing unique jerseys featuring a butterfly and a bee on the front and boxing gloves with numerals on the back.

The special Ali jerseys worn on July 19th will be available for auction online (auction details below) with all monies raised from the jersey auction donated to the Parkinson’s and Movement Disorders Center at VCU Medical Center. The Squirrels will then wear a similar Ali tribute jersey on September 1st against the Hartford Yard G.O.A.T.S. (to commemorate the Greatest Of All Time). Other Ali-themed promotions will take place during the game.

The Flying Squirrels organization has a special connection with the boxing community through President and Managing General Partner Lou DiBella. DiBella’s name has become synonymous with boxing after an 11-year run at HBO sports. He created and orchestrated the highly successful series, “Boxing After Dark.” Under his guidance, HBO experienced enormous success with some of the most high profile matches in boxing history. After leaving HBO, Lou formed DiBella Entertainment and has established it as one of the world’s leading boxing promotional companies. During his career, DiBella has forged a friendship with the Ali family. In honor of the life of Muhammad Ali, the Squirrels will be adding a permanent tribute on the concourse with boxing gloves signage.

“Muhammad Ali was much more than a boxer; he was a person of principle and a kind and giving man,” said Lou DiBella. “His positive impact on this world transcends sports and his legacy lives on. It’s appropriate for us to honor Muhammad in the Greater Richmond Area by raising funds and awareness for VCU’s Parkinson’s and Movement Disorders Center. It’s also fitting that he be honored, like Arthur Ashe, with a permanent tribute in our ballpark.”

Auction #1 Details
The first Ali jersey auction will begin exclusively online on Sunday,July 17th at 9:00 PM. The bidding will end on Sunday, July 24th at 9:00 PM. The July 19th jerseys will feature the butterfly and bee design on the front with a boxing glove silhouette on the back. The July 19th jerseys will also feature a special patch on the sleeve commemorating the 20th anniversary of Ali lighting the Olympic Torch.

Auction #2 Details
The second Ali jersey Auction will take place in-person at The Diamond on September 1st against the Hartford Yard Goats. The jerseys will have the butterfly and bee design on the front and the boxing glove silhouette on the back. September 1st jerseys will also feature a G.O.A.T. (Greatest of All Time) patch on the sleeve. Bidding will end in the bottom of the sixth inning.