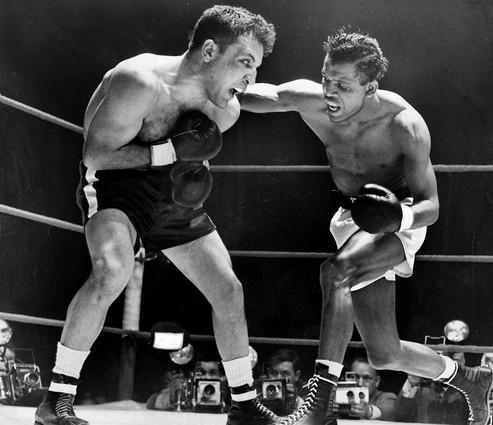 Sixty years ago today, Sugar Ray Robinson and Jake LaMotta met for the sixth and final time at Chicago Stadium in a clash over the middleweight title. This bout, like much of the Robinson-LaMotta series, was immortalized in the film Raging Bull. Yet even before that film, boxing fans remembered the bout for its brutality and the finality of its ending, earning its nickname as “The St. Valentine’s Day Massacre.” However, because of that film, the fictional version of this classic fight has become accepted as historical reality. The reality of these two great fighters, their records and their last engagement were quite different from Scorsese’s script.

Robinson and “The Bronx Bull” met for the sixth and final time in 1951. The pair had last fought in 1945, and Robinson’s sole loss was to LaMotta back in February 1943. Robinson had scored decisive victories over LaMotta in the first, third and fourth fights. The fifth encounter, however, was a razor thin Split Decision win for Robinson, with the Sweet One later saying it was the toughest of all his bouts with LaMotta. In my book, the real record between the gladiators was one win for LaMotta, four wins for Robinson and one Draw.

Jake LaMotta was 78-14-3 by the time of the St. Valentine’s Day Massacre. The rugged Italian-American swarmer had waited for seven long years as a top middleweight contender before finally getting his shot at the middleweight title. Defeating the greatest boxer France ever produced in the form of Marcel Cerdan, LaMotta had defended his belt twice against worthy contenders before meeting Robinson.

Contrary to his depiction in Raging Bull, Sugar Ray was hardly the only foe that had given the Bronx Bull fits. Frenchmen Robert Villemain and Laurent Dautuhille had also defeated LaMotta, and part of the reason Cerdan lost their title fight was that the French champion separated his shoulder during the bout. Welterweight Fritzie Zivic also defeated LaMotta. The Bronx Bull was tough, but hardly the unstoppable force that Martin Scorsese made him out to be. For his part, Ray Robinson was 120-1-2 by the time he met LaMotta and was coming off a classic and distinguished stint as World Welterweight Champion. Robinson moved up to middleweight in 1950 and beat a string of contenders, such as George Costner, Bobo Olsen and the aforementioned Robert Villemain, prior to challenging for the 160-pound crown.

In some ways, this fight was just like the preceding five engagements. LaMotta plowed forward behind his jab, applying relentless pressure. Robinson would move back and side-to-side, using his perfect sense of space and timing to land lance-like blows. LaMotta was a good enough swarmer to get in and land thunderous shots, but he paid a steady, grinding price for doing so. However, over the past six years much had changed in the relative balance between the two men. LaMotta and Robinson were virtually the same age, but it was the Bronx Bull that had far more boxing mileage on his body.

According to his autobiography, LaMotta was struggling to make weight by 1951, which would have left him with a shallower gas tank in the ring. By contrast, Robinson had grown from a small welterweight into a small middleweight, and while he was certainly smaller than LaMotta, he was no longer giving away as much as 15 lbs in the ring. Finally, all of the previous encounters between the two men had been scheduled for 10 Rounds. Fight #6 was a title fight, and scheduled for the full 15.

LaMotta’s bull rush won him the first round, and a rally captured the middle rounds for him. Otherwise, the fight was all Robinson. The problems with making weight and the sheer, grueling toll of applying pressure to the Sweet One began to tell by 11th, with LaMotta looking listless. The Bronx Bull plodded forward doggedly, but threw ever fewer punches. Robinson landed almost at will, and an exhausted LaMotta resorted increasingly to holding on to survive. Contrary to what was depicted in Raging Bull, there was no tragic climax with LaMotta intertwining himself in the ropes and challenging Robinson to do his worst. Instead, an exhausted, hurt LaMotta crumpled onto the ropes, tied Robinson up, and was saved by the referee. It was called a “massacre” not because of a fictional Scorsese blood bath, but because LaMotta was virtually helpless for the last few rounds of the fight.