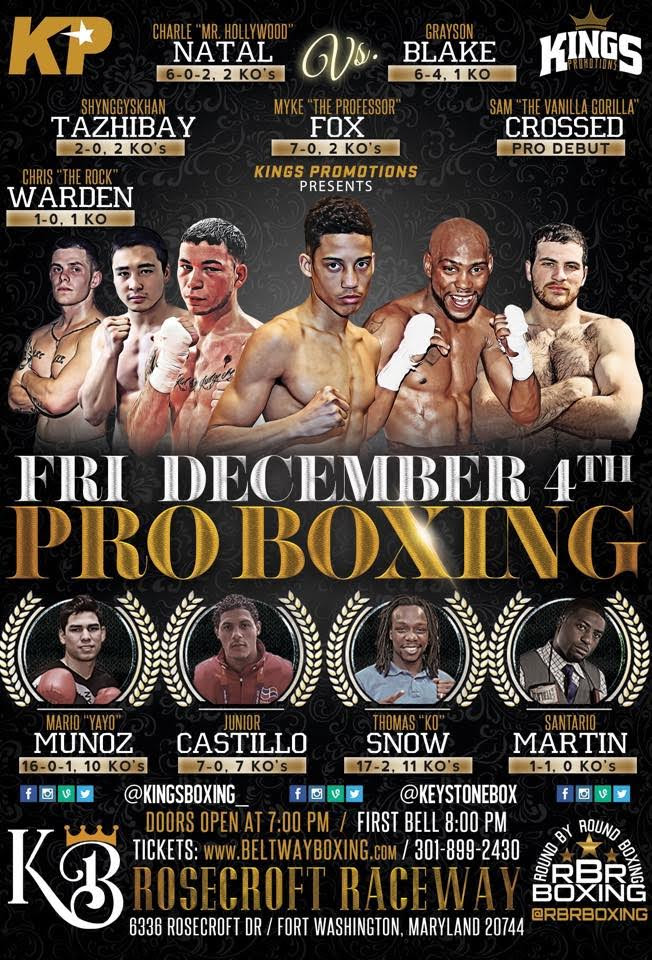 On Friday night, December 4th, King’s Promotions will promote a night of boxing at the Historic Horse Racing Track in Fort Washington, Maryland.

Scheduled to appear in a 6-round bout will be undefeated Mykal Fox. Fox of Forestville, Maryland has a record of 7-0 with 2 knockouts. The 19 year-old is coming off a 6-round unanimous decision over Juan Carlos Castillo on July 18th in Washington, DC. His opponent will be announced shortly.

Scheduled to appear in 8-rounds bouts:

Mario Munoz (16-0-1, 10 KO’s) of Guadalajara, Mexico will compete in a Featherweight bout against an opponent to be named.

Featherweight Thomas Snow (17-2, 11 KO’s) of Capitol Heights, Maryland will see action against an opponent to be named.

Junior Castillo (7-0, 7 KO’s) of Santo Domingo, DR will fight in a Jr. Middleweight bout against an opponent to be named.

Chris Warden (1-0, 1 KO) of Lusby, MD will fight in a Jr. Welterweight bout against an opponent to be named.

Shynggyskhan Tazhibay (2-0, 2 KO’s) of Karaganda, KAZ will take on an opponent ti be named in a Welterweight bout.

Sam Crossed of Greenbelt, MD of Greenbelt. MD will make his pro debut in a Cruiserweight bout.

Santario Martin (1-1) of Gainesville, FL will take on Nicholas Hernandez (2-1) of Reading, PA in a Middleweight bout.