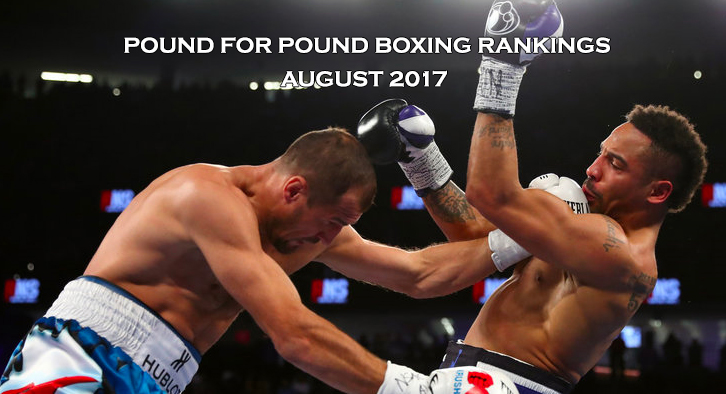 Every month I rank the 10 best fighters in boxing regardless of weight class based off quality of opposition, performance, and the impact of their performance.  Here we go!

After defeating Kovalev via knockout, all doubts were erased from the first fight controversy. After years of being a top 3 fighter, finally Ward sits atop his rightful and well-earned spot at the top.

GGG has ruled the middleweight Division for the past few years now and is now a month away from defending his belts against Canelo Alvarez.

Lomachenko continues to impress with his supreme boxing skills, speed & power. He dominated Marriaga via a 7th round stoppage. Loma is good; hopefully a showdown with Mikey Garcia or Rigondeaux can show us he is great.

Recent Activity: Loss MD in March to Sor Rungvisai in a FOTY candidate

Chocolatito suffered his first loss via controversial MD in March; with the rematch next month, he looks to get his revenge.

Recent Activity: W TKO in May against Felix Diaz

Crawford has virtually wiped out the junior welterweight division; he fights again August 19th, against worthy challenger Julius Indongo. With 4 belts on the line he looks to be the first champion in 12 years to hold every belt in the division.

Thurman defeated a top 3 welterweight in Danny Garcia stamping his case as the number 1 welterweight in the world. While injury may cause Thurman to be out until the end of the year, Keith “One Time” Thurman is no longer the hunter, he is the hunted.

Recent Activity: Canelo won an easy decision against Chavez Jr. in May. He will officially move up to the Middleweight division and challenge GGG for the Middleweight crown next month in boxing’s biggest fight of the year.

Kovalev lost via knockout to Ward and this time without much controversy. However Kovalev is still atop the Light Heavyweight Division after ruling for the past 3 years. No shame in losing to the number 1 P4P fighter, The “Krusher” Kovalev will return.

Recent Activity: W via KO over Kell Brook in May.

Spence is the 2nd ranked Welterweight in the world, and fans are starting to take notice.  Spence is looking to fight the biggest fights he can get, and it doesn’t seem like many Welterweights are in a rush to get in the ring with him.

Mikey Garcia has the skills to be higher on the list, however with his in activity he hasn’t gained the notoriety he has deserved. Garcia impressed in his victory over Broner winning 11 rounds easily. Garcia looks to continue to fight the biggest fights he can, and if he continues to win, we may be looking at Garcia climbing the ranks.

Removed out of the Top 10: Manny Pacquiao

Recent Activity: Pacquiao lost a very controversial fight against Jeff Horn last month.  Pacquiao has invoked his rematch clause and will be looking for revenge in November. However given Garcia’s victory over a top contender, the Hall of Famer has to take a back seat on the top 10 list.