Freddie Roach is one of the greatest trainers in the history of boxing.  On top of that, he is also one of its biggest personalities and one of the most genuine people you will ever meet.  Roach, despite physical ailments, keeps plugging away.  He is facing another grueling training camp as star pupil and best pound for pound fighter in the world, Manny Pacquiao prepares for a big challenge in the form of Miguel Cotto.  On a personal note, every time I speak with Freddie I feel inspired and motivated.  No matter his circumstance, Freddie is always the same.

SD- How are things going Freddie

FR- Good.  Big schedule coming up with a lot of traveling.  It’s what I like though

SD- What are your thoughts on the Floyd Mayweather Jr. vs Juan Manuel Marquez match up

SD- I don’t know if you are watching HBO’s 24/7, I’ll assume you haven’t.  Marquez is drinking his own urine.  Have you ever heard of that in training

FR- It’s a waste system and the body gets rid of it.  How can that be good for you.  I don’t care how much fucking pee he drinks he is not going to win

SD- Everyone is clamoring for a Manny Pacquiao vs. Floyd Mayweather Jr. matchup.  But first things first, you have your work cut out for you with a very formidable foe in Miguel Cotto.  What challenges does Miguel present for Manny

FR- Well you know his size and strength are a problem.  He is very big.  He nullified Shane Mosley’s speed.  He is a very intelligent fighter.  Anyone that says this is an easy fight is a fool.  This is the hardest fight of our life.  I believe that 100%.  I don’t think we can win by knock out this time.  I think we will win via a decision.  This guy is a game, tough guy.  He has already been in camp for three weeks.  If he wins this fight everything bad that has happened in his career goes away.  This is the fight of his life.  Anyone that expects anything different would be a fool

SD- Cotto is known for his tough chin.  Do you think this is the best chin Manny has faced 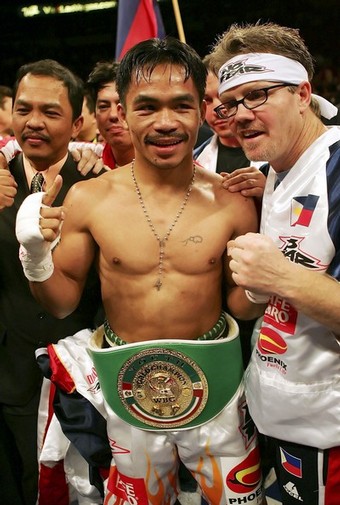 SD- When do you start camp

SD- You had Michael Moore with you in the last camp.  Is he still with you

FR- Michael Moore is no longer here.  It just didn’t work out

SD- How is your health

FR- He is a talented guy.  I worked with him a couple of times.  He told me he was pretty good at MMA but sucked at boxing.  He was very humble.  He is one of those guys in the gym that only gives 30-40% because he knows what he is capable of.  He boxed a couple of times in my gym.  He didn’t hurt anyone and no one hurt him of course.  When I saw the way he fought Forrest Griffin, the way he measured him; his boxing skills are a lot better than people give him credit for.  I don’t know if he could beat Roy Jones or not but I tell you he would give him a run.  He is a great fighter, he knows distance and he is very intelligent

SD- In the world of MMA, Silva’s hand speed and head movement are incredible.  How do you think they measure up to the elite boxers

FR- He is right there with the top guys.  When he comes over and boxes with the top guys he does very well.  He is really fluid.  There are a couple of things he needs to work on.  He likes to lay on the ropes a little bit and gets up a little too high.  He reminds me of James Toney when he is on the ropes.  We were working on that.  He is easy to work with and has a great work ethic.  He is a great fighter all around

SD- Boxing is far from dead as some big fights are on the way.  What are your thoughts on the Heavyweight Title fight between Chris Arreola vs. Vitali Klitschko

FR- I favor Klitschko but Arreola has a chance because he is tough.  Arreola has no quit in him and he will make it tough but I think Klitschko has too much size for him.  Vitali Klitschko knows how to use his size and stays out of trouble.  I think Vitali will out box him but it should be a pretty exciting fight

SD- Arreola is a bull.  He can take a punch

FR- Yeah, he is a very tough guy.  This is a big step up for him.  I would have like to see him step up more gradually.  He is going from fighting a C fighter to an A fighter, it might be too much for him.  I wish him the best though.  He comes to my gym and watches Pacquiao workout

SD- Getting the cart ahead of the horse, what are your thoughts on the dream matchup of Floyd Mayweather Jr. vs. Manny Pacquiao providing both win their next bouts

FR- Obviously they both have to win their fights for that to happen, which I think they both will.  I don’t believe Floyd will ever fight Manny Pacquiao.  They tried to negotiate with him and he won’t even negotiate.  If Edwin Valero remains undefeated we will probably go that route.  We are not going to sit around and wait on anyone.  There is no way we are taking a 50/50 split with Floyd.  We are the draw, not him.  Manny is the top pound for pound fighter in the world.  Floyd has an ego that is huge and wants all the money but Manny has one too.  I don’t think negotiations will ever happen.  It is a fight the whole world wants and I want to see it myself but Mayweather is not realistic when he is negotiating

SD- I think if they matched up it would be the biggest pay-per-view in the history of boxing.  Would you agree with that

FR- 100%, it would blow everything away.  Everywhere I go other countries you name it that is all they talk about; when are you going to fight Mayweather

SD- Thanks Freddie and good luck

FR- Thank you very much